The Miracle Of Self Transformation… 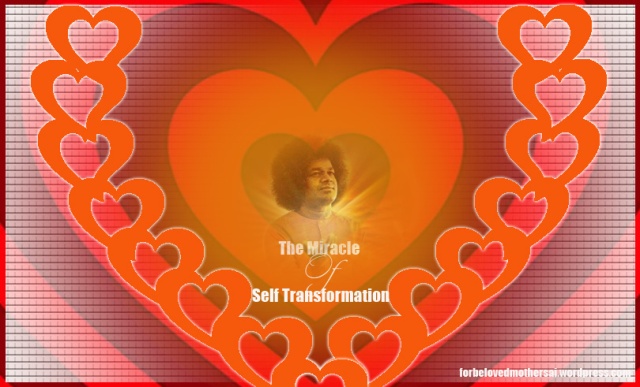 ‘Bhagawan, Sai, Baba, Swami, Sri Sathya Sai Baba, Sai Maa, Mother Sai…’, every second, every minute, every hour of each day the Sacrosanct Name along with its incomparable essence resounds in myriad devoted hearts churning and revitalising thoughts, words and actions. However, it’s that profound moment of the year again when the soul desires to offer even deeper, full throttle homage to Beloved Swami, to His Truth, His Words, His Magnanimity, His Chosen Sojourn…this Celestial Odyssey, to the Impact of what He Willed to Enact and most distinctly to His lattermost Divine Decision during March – April 2011 that stunned one and all.

Acknowledging the inexplicable significance of this segment of time as regards the Divine Advent, so too, with a view to honour and serve the Sai in each being, devotees are lovingly observing the upcoming days spanning the last week of March – 27th April 2017, as a month of: ‘Giving and Forgiving’.

The Lord in His gentle, most tender compassion chose to descend to elevate us all…and more so…to alleviate the suffering of all earth beings. How can we offer gratitude to the One Whose mercy is so superlative and perfect? How can there be a true Sailent Offering…a Seva-Sadhana Vandana…a Prem Aradhana for the Beloved Master – Bhagawan Sri Sathya Sai Baba? Perhaps by ceaselessly ruminating over His Fascinating Advent, His Exalted Life, His Timeless Messages, His Dictums, His Distinct Responses, His ‘Being There For You Through Time…All The Time’…perhaps by emulating an iota of the infinite examples of Oneness He continually…ever so patiently set. Perhaps also through persistently pursuing and working on the miracle of self transformation.

The Teaching Of Love And Peace To All Creation…

Each day the Beloved One decided to spend in the SSSIHMS needs to be deeply respected and unfalteringly valued for none can fathom the larger picture. The Master Plan is known only to the Master Planner. 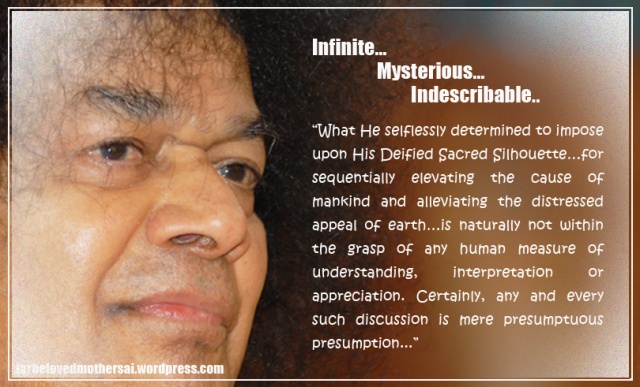 “What He selflessly determined to impose upon His Deified Sacred Silhouette…for sequentially elevating the cause of mankind and alleviating the distressed appeal of earth…is naturally not within the grasp of any human measure of understanding, interpretation or appreciation.
Certainly, any and every such discussion is mere presumptuous presumption…”

In recognition of Bhagawan as the Source, the origin of the five elements, the basis of all life forms, of human values…let us know Him and feel for Him in all that lives around us. Each episode of the Sathya Sai Avatar exemplified the vitality of compassion, the illustrious virtue of impeccable giving and gracious forgiving, of steering humans towards humanity.

Consequently, it is time to uniquely watch our WATCH – Words, Actions, Thought, Character and Heart especially during this holy period of Sai Lent, lent and granted to us for us – Universal Seva, by the Beloved One through this most mystifying enactment.

The underlying factor of any Divine Incarnation is peace for all…and particularly so for this greatest Advent of all advents – the Sathya Sai Advent, in which He declared Himself as – Sarva Devata Atita Swarupa. He came cloaked in the Dharma of Ahimsa, with Love as His Form and Truth as His Word…to embrace all with the supreme sentiment…the heady fragrance of Shanti, thereby heralding comprehensive transformations. So the wellbeing of creation, of the solar system, of earth, of each and every being is His concern and gives Him Bliss.

Thus, the coming time frame commencing during the last week of March 2017 till Thursday, 27th April 2017 is a month of introspection, deep contemplation…and it ought to prompt, precipitate an expansion in consciousness escorting an enlightened way of living. It should then culminate in the celebration of Sai…within and without…throughout. The Presence of Beloved Swami has to be joyfully extolled in every inch and atom that surrounds us – in the mineral world, the plant world, the animal/bird/aquatic world…and the human world.

Be it the soft colours of dawn or the blazing hues of a unique sunset; the sweltering desert sands or the icy Himalayan peaks; the mysterious waters of the deep sea or the gushing flow of rivers and streams; the magnificent wild animals or the chirping melodies of winged wonders; the blossoms of Spring or bitter winds of Winter; the elements five or that breath that gives life; the hard toils of the farmer or the helpless woes of the homeless; the innocence of a new born or the wisdom of the seers; the wealth of the wealthy or the paucity of those challenged; the meek or the strong, the righteous or the wrong; masculine, feminine, old or young…all are divinely connected, finely spun and strung…Sathya Sai is the core basis of this Cosmic Spectrum…

The Lord did us bless with colossal opportunities for random acts of kindness! Loving Obeisance to Beloved Bhagawan – the Teacher Supreme and His Supreme Teaching of Love and Peace to all Creation…

About For Beloved Mother Sai

Breathing Beloved Every Single Moment Of Living!!! Tum Shwaas Ho!...Tum Pass Ho!!...Tum Vishwaas Ho!!!
View all posts by For Beloved Mother Sai →
This entry was posted in Beloved Mother Sai, Creator And Creation, Feelings, Heart Full Of Love, March/April 2011, The Greatest Avatar, The Teaching Of Love And Peace To All Creation. Bookmark the permalink.